An 18-point first-half surge got the Polars rolling en route to a 62-46 victory. Getting to the Class 2A championship game, however, has been about much more than basketball. 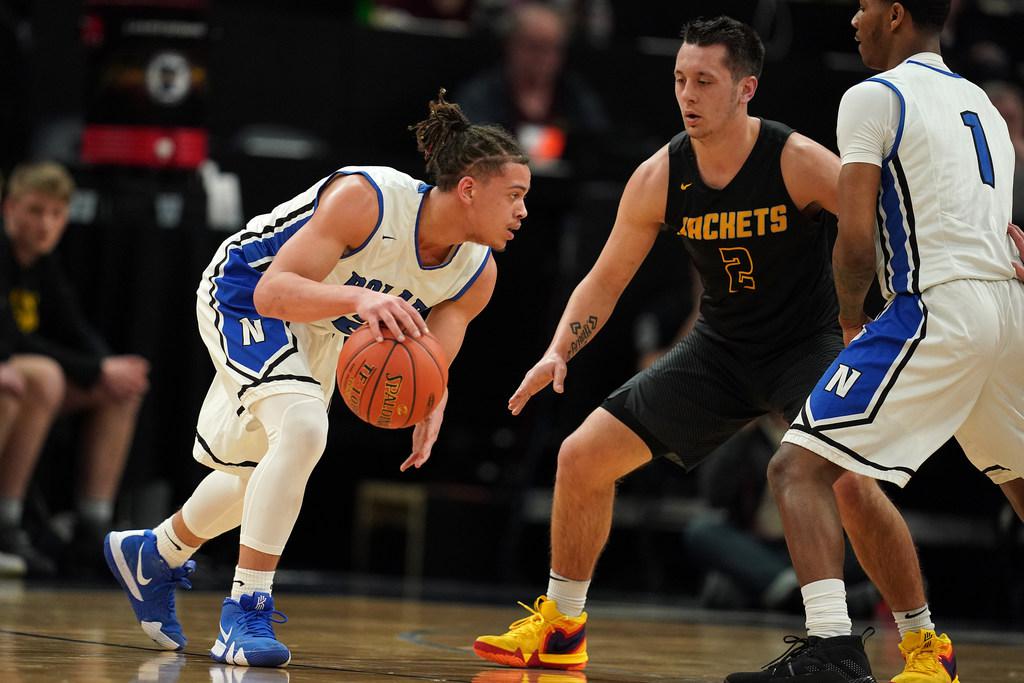 Considering all that Minneapolis North has been through this season, with the deaths of two young people with close ties to the program, getting to a state championship game is more than just the by-product of a successful basketball program. It’s an affirmation of coming together in response to tragedy.

The Polars used an 18-0 blitz early in the first half to establish a big lead, then leaned on their defense and quickness to hold off Perham 62-46 in the Class 2A semifinals Friday at Target Center.

After a one-year absence, North (23-9) will be playing for another championship Saturday. They won back-to-back Class 1A state titles in 2016 and 2017 before moving up to Class 2A last year.

North coach Larry McKenzie said basketball has been the Polars’ refuge when things got tough.

“We had a couple of days this year when we couldn’t even practice because of them losing friends and the emotion of that,” he said. “We had to take a couple of days just to support our kids.”

Quitting was never an option. Instead, the North players found strength in each other.

“We never thought this was a lost year or that we weren’t going to make it,” said senior point guard Eli Campbell, whose back-to-back three-pointers spurred their big first-half run. “You’ve got to have the mindset that you’re going to make it, no matter what happens.”

Hardened by circumstances and a tough schedule that left them with nine losses, North played with urgency throughout the game against the Yellowjackets, feeling that getting to a state championship game would be their contribution to the healing process.

“We’re from the northside. We don’t got what everybody else got,” Campbell said. “So we got to make something out of nothing.”

Added senior Nasir El-Amin, who led the team in scoring with 13 points Friday, “We make the story better.”

Minneapolis North used an 18-point first-half blitz to build a big lead, then used its depth and defense to maintain it, resulting in a 62-46 victory over Perham in Friday’s second Class 2A semifinal.

The victory sends the Polars to Saturday’s championship game against Minnehaha Academy. It will be North’s first finals appearance in Class 2A after having won back-to-back Class 1A state titles in 2016 and 2017.

Perham, which trailed by double-digits for most of the game, finished the season 30-2.

Minneapolis North (23-9) came out blazing in the first half. Generating offense from their ball-pressure defense and shooting three-pointers with accuracy, the Polars spotted Perham the game’s first basket, then went on an 18-0 run. Eli Campbell made back-to-back, momentum-building three-pointers for the Polars during the stretch.

Perham shook out the cobwebs and started to come alive after that, matching North basket for basket for the rest of the first half, which ended with North leading 31-15. Nasir El-Amin led the Polars with 9 first-half points and freshman Willie Wilson added 7.

The Yellowjackets looked far more composed in the second half, running the offense that afforded them to just one loss (to Minnehaha Academy) before Friday’s game. But they weren’t able to make much of a dent in the North lead as the Polars continued to beat the Perham defenders off the dribble and get to the basket.

Each time Perham gained some momentum, North answered. When the Yellowjackets' Jensen Beachy drove, scored and converted a three-point play, cutting into the lead, North’s Clifford Brown responded with a clutch three-pointer to regain the margin.

El-Amin led North with 13 points. Sophomore center Davon Townley Jr. added 12 points and 8 rebounds and freshman Willie Wilson had 11 points, putting an exclamation point on the victory with a resounding dunk in the final minute.

Josh Jeziorski had 15 points and Finn Diggins 14 for Perham.