No. 2 seed Waseca pulls away to defeat Austin

The Bluejays' 79-69 victory puts them in the Class 3A title game. 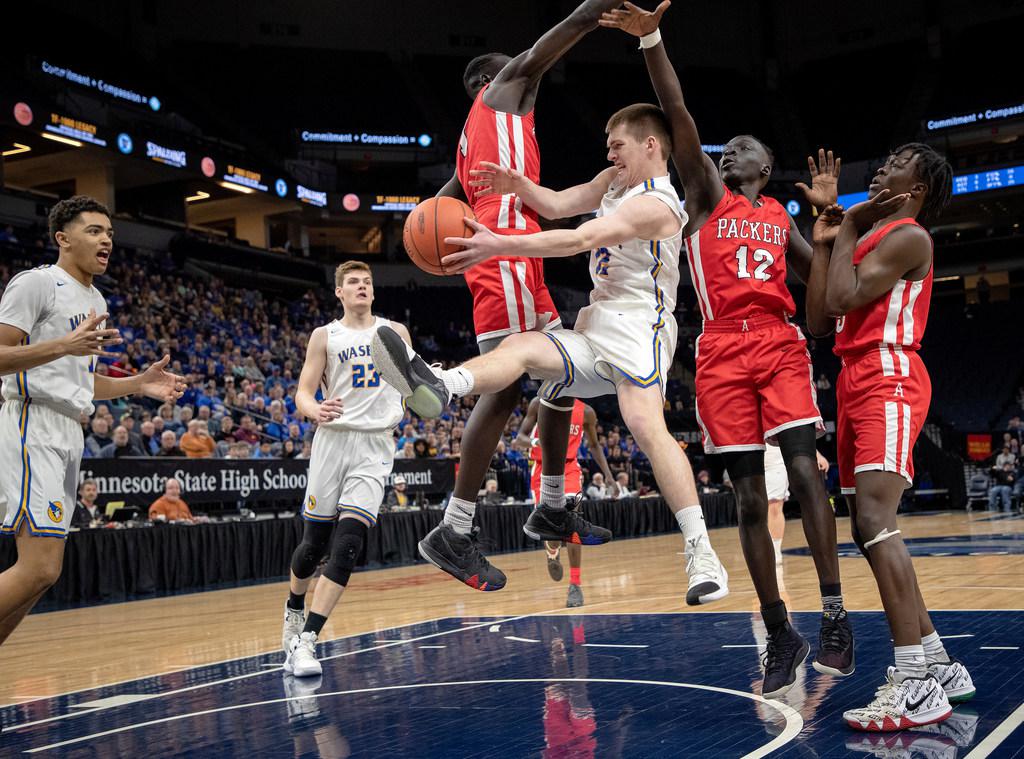 Waseca's Ryan Dufault (12) passed the ball to teammate Kyreese Willingham (1) as Austin players defended in the first half of the Class 3A semifinal Thursday at Target Center. Photo: CARLOS GONZALEZ • cgonzalez@startribune.com

The duo came through on an off day for Willingham (0-for-7 from the field), scoring a combined 53 points in the No. 2 seed Bluejays’ 79-69 victory against No. 3 Austin.

“Whenever one of our teammates is going off like that, we just try to find a way to get them the ball,” said Willingham, who scored all eight of his points on free throws. “And Ryan and Andrew both did their parts today. They felt on fire.”

No one burned brighter than Dufault. During a stretch late in the second half, he scored 10 consecutive points for his Bluejays (30-1). He finished with a game-high 30 points.

Fadness endured a reoccurring nightmare as his players committed 21 turnovers.

“These guys got sick of me yelling, ‘Quit turning the ball over,’ ” Fadness said. “When you have the skilled players we have, I don’t expect us to turn the ball over at the rate we did.”

Morgan, a 6-8 center, presented other problems for the Packers (24-6), who had one player taller than 6-4. Morgan scored 23 points and grabbed 15 rebounds as the Bluejays outscored Austin 46-20 inside and 16-10 on second-chance points.

“We knew we had a height advantage,” Morgan said. “I knew I could dominate down low.”

Three-point shooting kept the Packers breathing. Senior guard Medi Obang hit six times from the three-point arc and led his team with 28 points. As a team, Austin shot 15-of-38 from deep. Junior guard Agwa Nywesh added 11 points, fueled by a trio of three-pointers.

No. 2 seed Waseca pulled away down the stretch for a 79-69 victory against No. 3 Austin in the Class 3A semifinal Thursday at Target Center.

Ryan Dufault led the Bluejays with 30 points and teammate Andrew Morgan added 23 and had 15 rebounds.

The Bluejays (30-1), who led 36-34 at halftime, advance to Saturday’s championship game against No. 1 DeLaSalle.