Senior guard Sam Fisher made seven free throws in the final minutes for the Hornets, making their first state tournament appearance in 53 years. 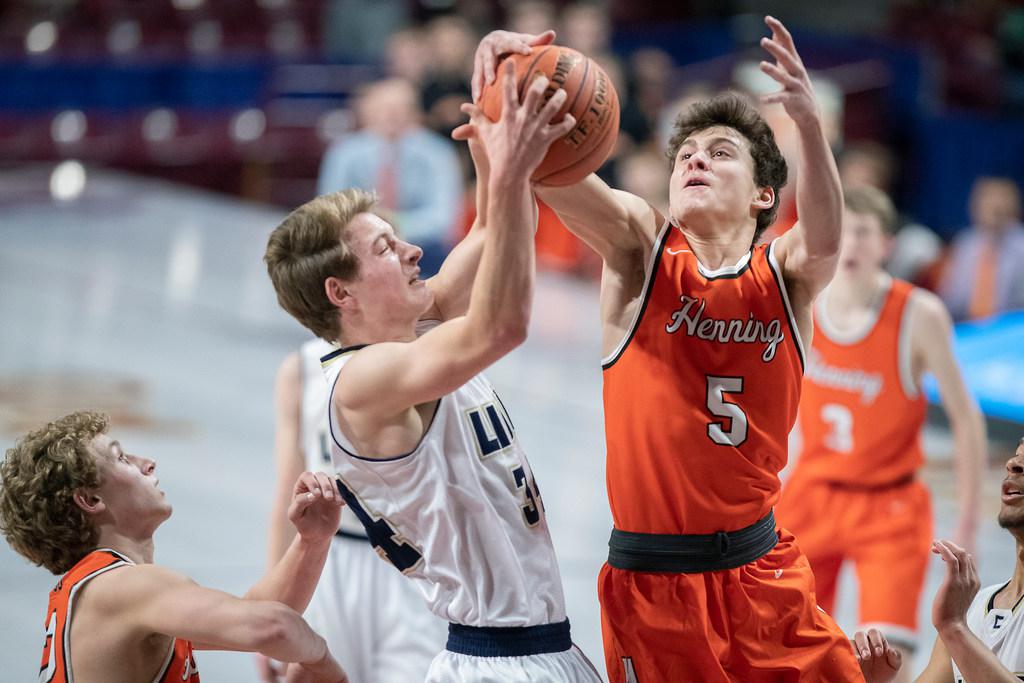 Christ's Household of Faith's Preston Alleman, left, and Henning's Isaac Fisher battled for the ball in the first half of the Class 1A quarterfinal Thursday at Williams Arena. Photo: ELIZABETH FLORES • liz.flores@startribune.com

Henning and Christ’s Household of Faith felt the sting of missing free throws under pressure.

Henning senior guard Sam Fisher was the key exception. He made seven of his eight free throw attempts in the final 2 minutes, 10 seconds, propelling No. 7-ranked Henning to a 63-56 victory over the Lions in the Class 1A quarterfinals Thursday at Williams Arena.

The Hornets (29-1) are making their first state tournament appearance since 1966.

“There was a lot of pressure,” said Fisher, who finished with a game-high 20 points, going 6-for-10 from the floor, and six assists. “I had to calm myself down, make it like nobody was watching.”

He made four consecutive free throws two seconds apart to turn a 56-54 lead to a six-point cushion with 24 seconds left. His teammates went through a 4-for-9 stretch, which included missing the front end of 1-and-1, from the free-throw line in the previous four minutes.

The Lions (23-6) trailed 55-53 when senior forward McCaleb Alleman stepped to the free-throw line with 30 seconds left. He made the first free throw and missed the second. Then things came unraveled.

Alleman, who paced four players in double figures with 16 points, was called for a foul after the rebound by Henning. He slammed the ball to the floor and it ricocheted off his foot into the stands, resulting in a technical foul.

“I thought it was misconstrued, and looked worse than it was,” Lions coach James Scheeler said. “That was tough to take with a win on the line. It’s a learning moment.”

So was the Lions’ free-throw shooting. They were 6-for-13 in the second half and missed the front end of one 1-and-1.

“We had an opportunity to win the game at the free-throw line, and didn’t take advantage of it,” Scheeler said. “They made their free throws at the end to win it.”

Free throw shooting under pressure has become a lost art. Henning and Christ’s Household of Faith will both attest to it.

Henning's Sam Fisher is an exception. The senior guard made seven of his eight free throws in the final 2 minutes, 10 seconds, propelling No. 7-ranked Henning to a 63-56 victory over the Lions in the Class 1A quarterfinals Thursday at Williams Arena.

Henning (29-1) is making its first state tournament appearance since 1966.

Fisher finished with a game-high 20 points and six assists.

The Lions (23-6) were led by senior forward McCaleb Alleman’s 16 points.