DeLaSalle trounces Princeton in 3A semifinal

The top-seeded Islanders took a 12-point lead at halftime and rolled to a 93-54 victory behind a combined 50 points from Tyrell Terry and Jamison Battle. 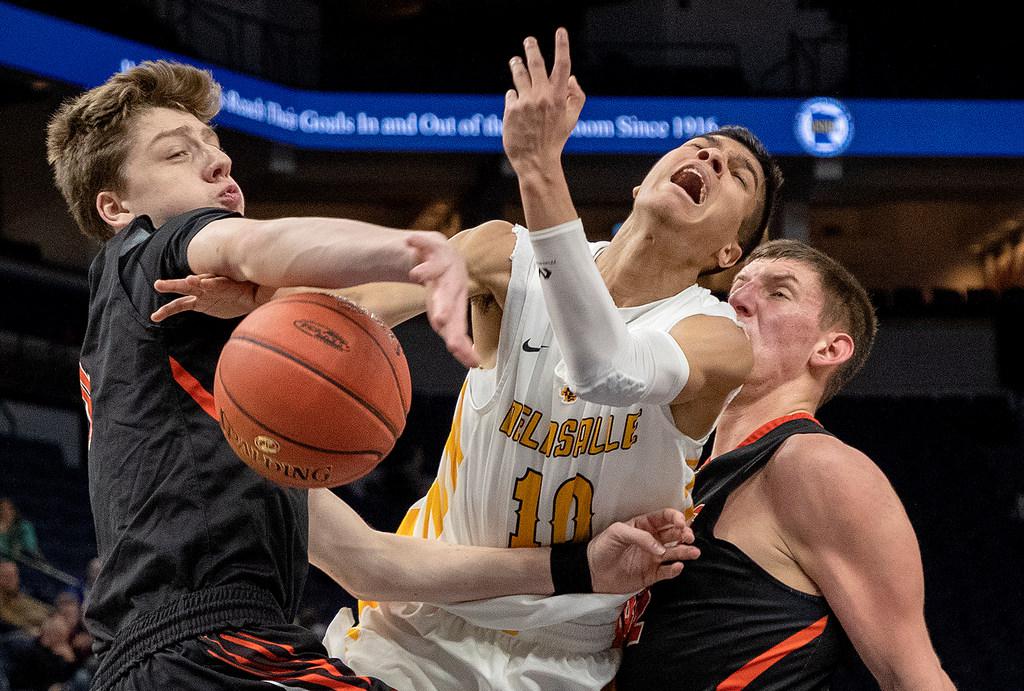 DeLaSalle's Tyrell Terry (10) was fouled by Princeton's Reilly O'Neil (4) in the first half of the Class 3A semifinal game Thursday at Target Center. Photo: CARLOS GONZALEZ • cgonzalez@startribune.com

Terry, the Islanders’ Stanford-bound point guard, absorbed his share of contact in the Class 3A semifinal against Princeton. Flattened by a hard foul with 3.4 seconds to go in the first half Thursday, Terry regrouped to sink two free-throws.

Those shots were good for his confidence as well as momentum. DeLaSalle built a 12-point lead it would only grow in a 93-54 rout.

“A lot of teams try to be physical with me because of my build and they think it’s a way they can get to my head,” Terry said. “I’ve dealt with that quite a bit this season so it wasn’t anything new.”

“We tried to make them earn every shot they took,” Tigers senior center Jon Stimmler said.

Terry finished with 22 points and sped the No. 1-seed Islanders’ offense up and down the court. No. 4 Princeton, the highest scoring team in Class 3A (84.8 points per game) tried keeping pace with DeLaSalle to no avail.

“All year we’ve prepared to play with those guys and run at that tempo,” Stimmler said. “I thought we ran pretty well in the first half.”

“We like to base our offense on tempo, get the ball up quick,” Terry said. “They did it as well, so it was a fun game to play fast.”

DeLaSalle found its range with five three-pointers in the second half. Senior forward Jamison Battle hit four of those triples and led all players with 28 points.

Princeton, meanwhile, finished 5-for-25 from the three-point arc. The Tigers’ scoring leaders were Adam Williams (21 points) and Stimmler (13).

DeLaSalle goes for its seventh state title in eight seasons when it plays Waseca for the Class 3A championship on Saturday.

No. 1 seed DeLaSalle ran away from Princeton in a 93-54 rout in the Class 3A semifinal on Thursday afternoon at the Target Center.

The Islanders (26-5) advance to the championship game at 5 p.m. Saturday at Target Center. They seek a seventh state title in eight seasons.

No. 4 Princeton (27-3) spent much of the first half trailing by double-digits. The Tigers cut their deficit to eight points late in the first half but got no closer. Jon Stimmler and Adam Williams combined for 34 points.