Unseeded Spring Grove knocks off 1A No. 1 seed Springfield

The Lions, making their first appearance in a boys' basketball state tournament, defeated the Tigers 78-67 in the first Class 1A quarterfinal. 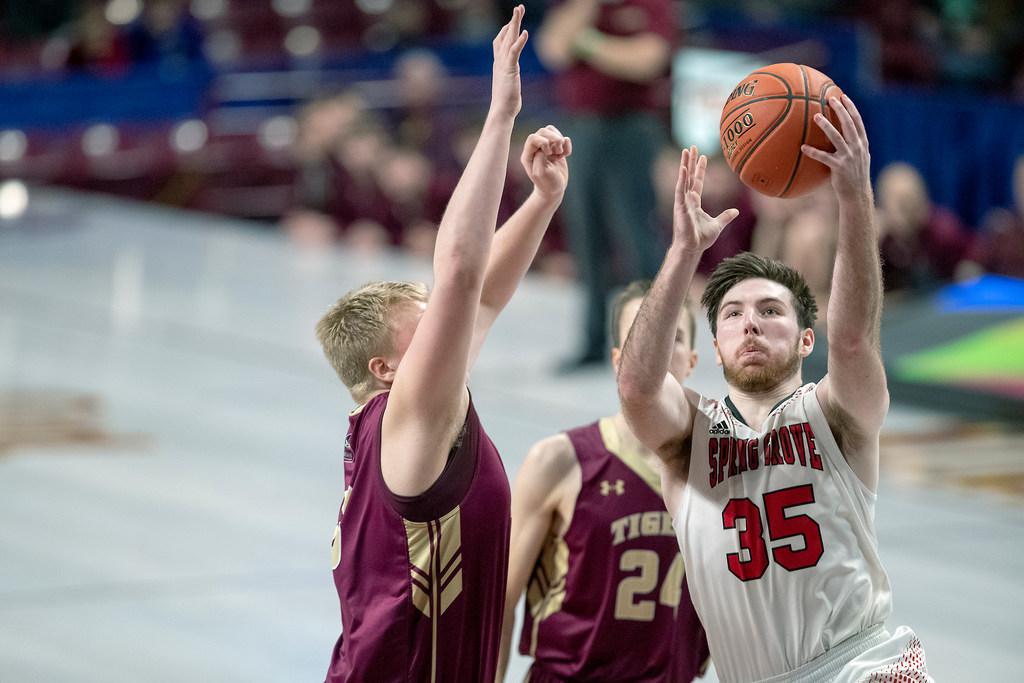 Spring Grove senior guard Noah Elton went up for two despite defensive efforts from Springfield's Curtis Tauer in the second half of the Class 1A quarterfinal Thursday at Williams Arena. Photo: ELIZABETH FLORES • liz.flores@startribune.com

Many of the talents the Lions used to earn those back-to-back football titles were on display Thursday at Williams Arena as the unseeded Lions, playing in the boys' basketball state tournament for the first time, defeated top-seeded Springfield 78-67, in the Class 1A quarterfinals.

“Our kids have a lot of character,” Spring Grove coach Wade Grinde said. “They were focused. They played with grit and determination. Toughness is a difficult word to define. You can be physically tough, but most of it has to do with mental toughness. These kids have proven their mental toughness.”

The Lions (24-4) also displayed their shooting ability, hitting 59.5 percent of their shots from the field and 65 percent from three-point range.

After making eight of 15 three-point field goal attempts in the first half to open a 41-34 halftime lead, the Lions made all five of their second-half three-point attempts.

“They beat us on the boards and to the loose balls,” Springfield coach Lance Larson said. “Add to that their three-point shooting, that was the difference.”

Then the Lions outscored the Tigers 15-7 over the final seven minutes to open a seven-point halftime lead.

The Lions opened the second half with a 13-4 run to build a 54-38 lead. The Tigers responded with an 11-0 run to narrow the Lions’ lead to five with 8:42 remaining. The Lions quickly responded with a 10-0 run – fueled by two three-pointers from Alex Folz, the football team's quarterback – to open a 15-point lead with just over six minutes. The closest the Tigers got in the final six minutes was nine.

“We wanted to limit their shots and slow it down,” said Lions guard Noah Elton, one of 10 on the Lions' state tournament roster who was on the football team. “This is equally awesome as winning the state title, but we don’t want to win just one game here.”

Elton, who was averaging 9.7 points per game, paced the Lions with 25 points and 10 rebounds. Folz scored 21 and Ethan Matzke contributed 19 points.

The loss ended an 18-game winning streak for the Tigers.

The Lions held a 41-34 lead at halftime before building a 16-point lead midway through the second half.

Springfield cut the Lions' lead to five before a 10-0 run pushed it back to 15. 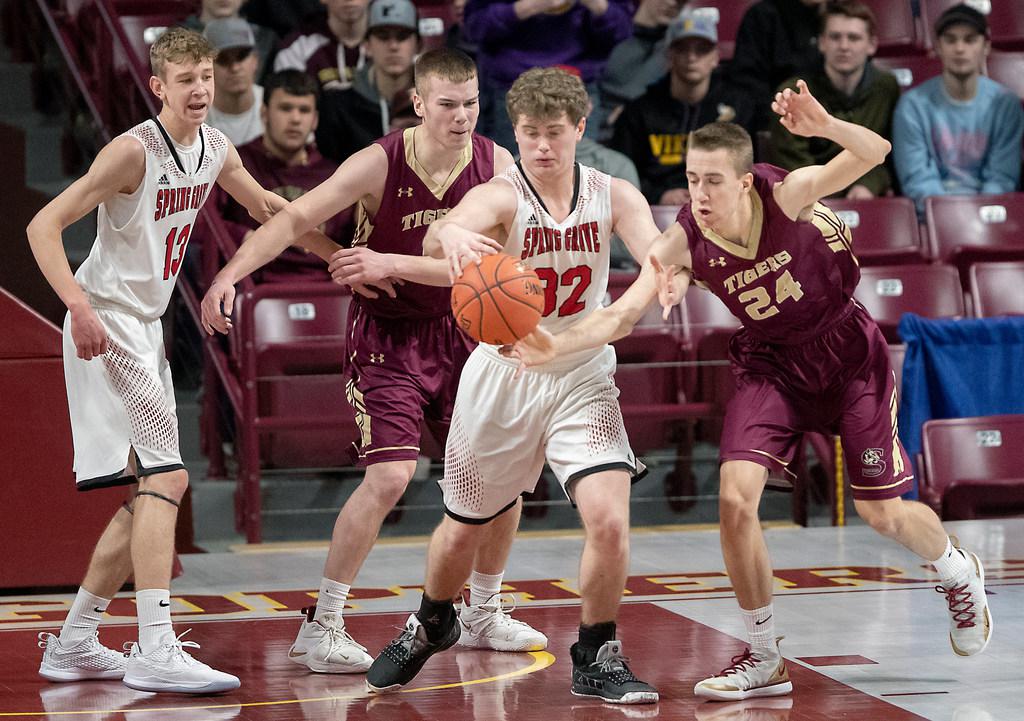 Springfield's Mitchell Buerkle, right, and Spring Grove's Kai Bjerke battled for the ball in the first half of the Class 1A quarterfinal game Thursday at Williams Arena. Photo: ELIZABETH FLORES • liz.flores@startribune.com