Top scorer J’Vonne Hadley broke a school record for points in a game set by a player on the 1961 tournament team. Plus three story lines for the 3A tournament. 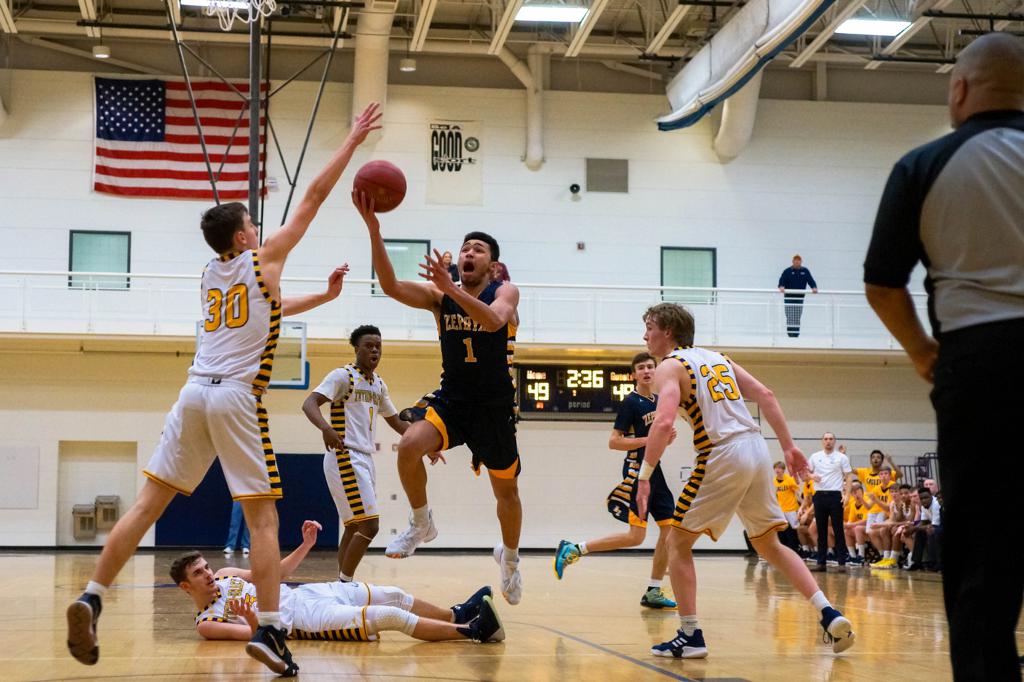 Mahtomedi junior guard J'vonne Hadley (1) went up for a shot against.Totino-Grace in the Class 3A, Section 4 final on March 14. Photo by Korey McDermott, SportsEngine

Mahtomedi, making its first boys’ basketball tournament appearance since 1961, has parallels to that team from 58 years ago.

Those Zephyrs were led by 6-6 forward Mike Patterson, who scored a school-record 50 points in a game. These Zephyrs look to 6-6 guard J’Vonne Hadley, who broke the record with a 52-point game this season.

“Crazy athleticism,” senior forward Devin Melzer said of Hadley. “He can basically get off whatever shot he wants.”

Hadley averages 27.8 points per game for the the No. 5 seed Zephyrs (24-5). They open Class 3A state tournament play at noon Wednesday at Williams Arena against No. 4 Princeton.

Mahtomedi’s state tournament breakthrough, after three section final losses in the past four seasons, owes to more than any individual player.

Senior guard Zac Centers set a program record with 108 three-pointers made. He averages 15.3 points per game.

“He’ll shoot in from five feet behind the three-point line, in transition, falling out of bounds,” Melzer said. “When he gets in a groove, he’s unstoppable.”

Melzer averages 11.1 points per game and ranks second to Hadley in assists and rebounds.

“He plays an all-around game,” Hadley said. “He does everything you want a teammate to do.”

Players discovered their strengths and formed their roles during summer basketball — to encouraging results.

“Going to summer tournaments and playing well against Park Center, Minneapolis North and Hopkins told us that we had a good group of guys and could compete against the top teams in the state,” Melzer said.

The confidence lasted into the Section 4 playoffs, where the Zephyrs dispatched nemesis Columbia Heights in the semifinals and Totino-Grace in the championship game.

“We went in knowing we could do it this time,” Hadley said. “In past years we were kind of scared.”

“We talked about it in the locker room after the game how this group got there, but they are bringing a lot of past players and community supporters with them,” Newman said. “A lot of those guys who were successful more recently made our guys interested in basketball.”

Centers added, “It’s amazing to think that all the way back from 1961 that there’s been nobody to get over that hump. So it’s an honor.”

1. Fresh field
Half of the teams return to the state tournament for the first time in many years. Holy Angels last reached the final eight in 2004. Not since 1985 has Bemidji represented. That’s nothing compared to Mahtomedi and Princeton, which can count the decades since their last state tournaments. For Mahtomedi, that was 1961. John F. Kennedy was the U.S. president. “Even guys who played for Mahtomedi back in the day have said good job,” senior forward Devin Melzer said. For Princeton, try 1932. Yep, 87 years. The country was mired in the Great Depression.

3. Defense wins championships?
Of course it does. But several teams are capable of testing that axiom. Six of the tournament qualifiers rank among the top eight in Class 3A scoring. Princeton (84.8 points per game) is first, followed by Waseca (83.8), DeLaSalle (78.4) and Mahtomedi (78.3). Holy Angels ranks seventh (75.6) with Austin (72.6) one spot behind.