At 6-foot-8, Frank Delaney is head and shoulders taller than most of his Cretin-Derham Hall classmates.

However, those same students felt obliged to hoist the Raiders senior forward above their heads and on their shoulders after Delaney’s inspired performance helped Cretin-Derham Hall clinch the Suburban East Conference title with a 63-61 victory over Roseville Friday night.

“I have great friends,” Delaney said of the impromptu ride. “It’s something I’ll remember forever.”

Delaney, who averages 4.9 points per game, finished with seven points, but it was his spectacular defense - including blocking several shots - that was key in destroying momentum built by Roseville (21-5, 13-3), ranked No. 5 in Class 4A by Minnesota Basketball News.

“Frank was huge tonight,” Kline Jr. said. “He’s so underrated. He’s worked so hard for this moment and to get to this point.”

While Delaney’s defense was timely, Donnell Gresham’s offense was clutch in final minutes of regulation for No. 4-4A Cretin-Derham Hall (23-3, 15-1).

Gresham made a pair of three-pointers to give Cretin-Derham Hall a 62-61 lead with time winding down. The senior guard, who averages 12.8 ppg, finished with 17 points despite a slow start.

“I wasn’t making my shots at first,” said Gresham, who is signed to play for Northeastern next year. “So I had to be confident to hit my shots.”

The game between league rivals had a playoff atmosphere, an aura Kline Jr. said is by design.

“This is why we’ve had a tough schedule all year,” Kline Jr. said. “To play games like this.”

Delaney and Gresham both said a run in the Class 4A state tournament is the next step for Cretin-Derham Hall, and Kline Jr. said the Raiders will not dwell on their conference championship for very long. 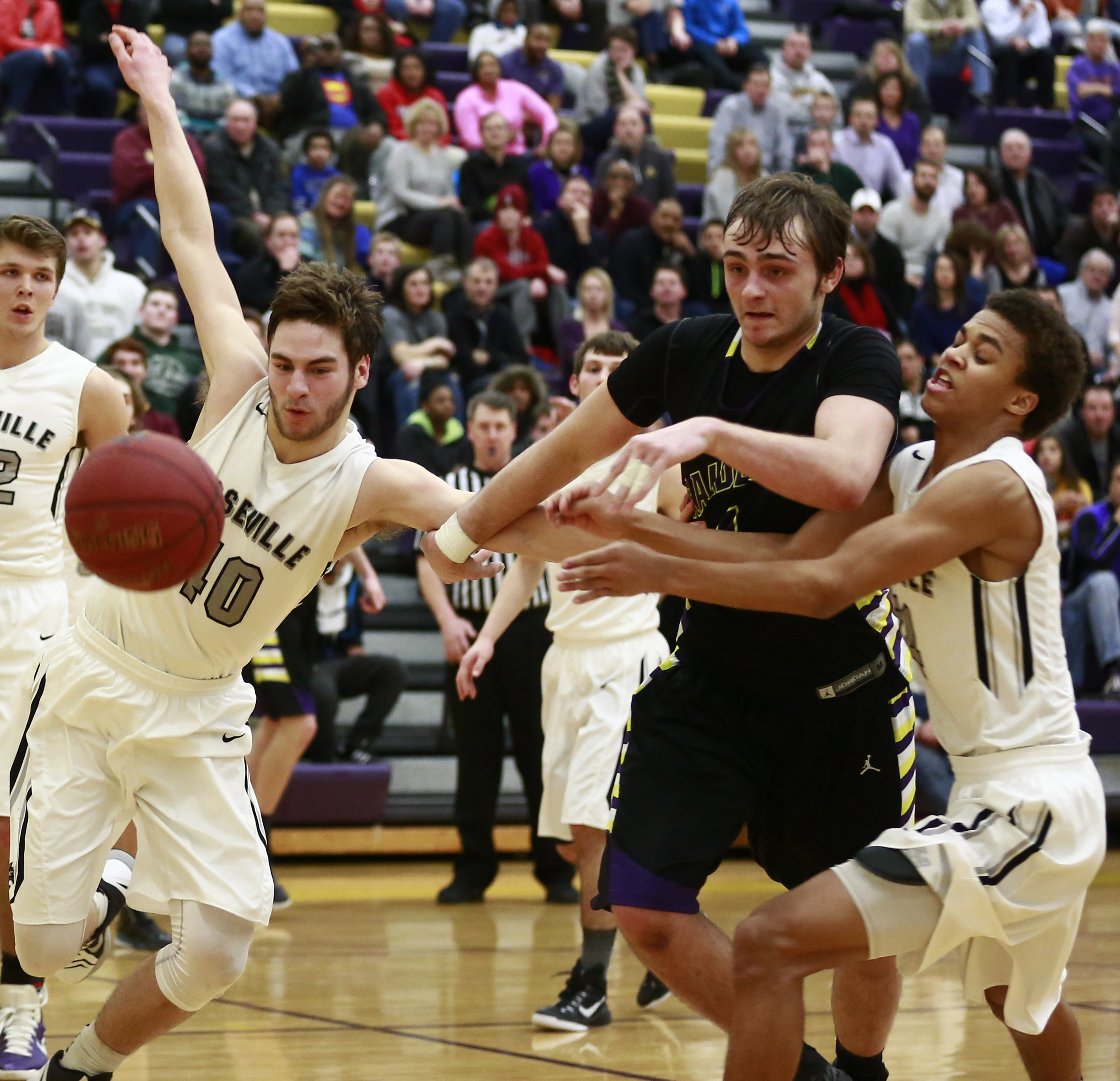 A Roseville play tries to hold back Cretin-Derham Hall's Sam Neumann (4) during a battle for a loose ball. Photo by Chris Juhn

The win secured the Suburban East Conference title outright for Cretin-Derham Hall (23-3, 15-1), ranked No. 4 in Class 4A.

Gresham made a pair of three-point shots in the waning moments of the game to give Cretin-Derham Hall a 62-61 lead, and then sank a free throw with 8 seconds remaining to cement the two-point victory.